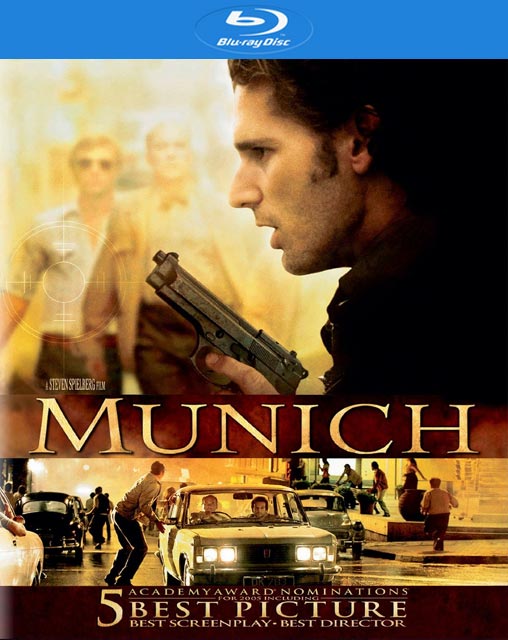 I’m one of a minority of ardent champions of Steven Spielberg’s 2005 dramatisation of Israel’s response to the massacre of eleven of its athletes at the 1972 Munich Olympics. In fact, I’d go as far as to say that it’s probably my favourite of his “serious” films (i.e. those with a more “worthy” bent, as opposed to more crowd-pleasing blockbuster fare like the Indiana Jones movies. Ironically, the main reason I like it so much is arguably because it seems so unSpielbergian, with a cold, calculated sense of brutality and a distinct lack of the sentimentality for which the director has become known.

While the source material, the novel Vengeance by George Jonas, is unabashedly partisan — a fact willingly acknowledged by its staunchly pro-Israel author — it seems to me that Spielberg and his two writers, Tony Kushner and Eric Roth, have succeeded in identifying and teasing out the moral quandaries that Jonas was unwilling (or unable) to acknowledge. That’s not to suggest for a moment that there’s any ambiguity as to whether the murder of the athletes was an appalling act of unjustifiable brutality; indeed, I’m not even certain that the film seeks to portray the Israeli government’s response as wrong. It does, however, raise significant questions both about the cyclical nature of violence and the futility of revenge, and about what enacting state-sponsored executions and acts of terrorism ultimately does to a person’s psyche. Vengeance is replete with passages in which it is asserted (rather too often and adamantly to be entirely convincing) that “Avner”, the Mossad agent played by Eric Bana in the film, experienced no qualms about the assassinations he carried out, but Spielberg and his writers take the opposite approach, depicting the complete mental breakdown of a man who begins his mission with a sense of utter certainty both about the justness of his mission and his own identity. The entirely fabricated encounter between Avner and a Palestinian operative, Ali (Omar Metwally), provides not only the film’s midpoint but also its emotional core, articulating in the strongest terms that violence can only lead to more violence, and that both sides — in spite of their irreconcilable differences — are ultimately in pursuit of the same goal. As Ali puts it:

You don’t know what it is not to have a home. That’s why you European reds don’t get it. You say it’s nothing, but you have a home to come back to. ETA, ANC, IRA… we all pretend we care about your international revolution, but we don’t care. We want to be nations. Home is everything.

Beyond that, though, it’s a tense Cold War thriller it’s a first rate piece of cinema, with its mature, reasoned approach to the Middle Eastern conflict merely serving as the icing on the cake. The whole thing looks incredible thanks to Janusz Kaminski’s steely (and very authentically 70s) photography, and the unusually minimalist score by John Williams knows when to retreat and when to come in for the maximum impact. I’ve seen Eric Bana’s performance described as overwrought, and it’s certainly true that it’s anything but subtle, but as a portrait of a man gradually undergoing a crisis of belief and identity, I find it hard to criticise. The rest of the Euro-pudding cast are on fine form too, with Mathieu Kassovitz particularly impressing as the mild-mannered toymaker recruited to build bombs, and Mathieu Amalric fabulously ambiguous (in more ways than one) as Avner’s contact, Louis.

Many of my favourite films are ones towards which I was initially lukewarm and came round to on repeat viewings, and this is definitely one of them. When I first saw MUNICH, I thought it was decent but overlong and overwrought. Now, I wouldn’t lose a second of it… even the much-criticised “sex and death” scene towards the end. While most people point to SCHINDLER’S LIST or SAVING PRIVATE RYAN as Spielberg’s great “serious” work, for me MUNICH will always be by far the more mature and more satisfying film. 10/10

Like the bulk of Spielberg Blu-ray releases (with the apparent exception of the JURASSIC PARK films), the master used is derived from a new scan of the negative. MUNICH was finished photochemically — it was even edited on a Moviola — and, as such, features a number of optical shots that suffer from reduced clarity (e.g. Example 10). On the whole, however, this is an impressive presentation, with plenty of fine detail, particularly in close-ups. It has a somewhat ephemeral look thanks to Kaminski’s heavy use of filters and soft diffusion, so it’s not directly comparable to something like (picking a random Super 35 title off the shelf) the remastered GLADIATOR.

It’s certainly not the best-looking of Spielberg’s films on BD, with the grain tending to look slightly clumpy at times, and the slight softness of the letterbox bars indicating a minor loss in detail, probably as a result of the downconversion process from the 2K (or 4K?) master. More troublingly, a handful of shots appear to have been sharpened, creating an unnatural, harsh effect (see Example 19). There are perhaps half a dozen such moments in the film, the kitchen scene during Avner’s visit to “Papa” (Michael Lonsdale) being the most sustained and noticeable.

Overall, though, I’m happy with this release. I’ve waited a long time for MUNICH to make it to BD, and (by and large) it’s been worth the wait. 9/10